In 2014 I bough our first robot vacuum. It was a Neato XV Signature Pro. This vacuum has been doing it’s job faithfully since then, but recently the screen died (for a second time) and it seemed like a good time for an upgrade. Enter, the Roborock S5 Max.

Back in 2014 I considered many different vacuums and landed on the Neato because of great pet hair performance and the laser based navigation. This meant it used LIDAR to map the room, and create an efficient path, instead of bouncing around randomly. This has become a lot more common, but to my surprise, even today there are still robot vacuums being sold without it – crazy!

The Neato wasn’t prefect though. There was no side brush and no wifi connectivity. However, back then the app didn’t do much more than letting you start and/or schedule the vacuum anyway – I’d basically only set the schedule once using the vacuums lcd screen, and leave it after that. Funnily enough, if it would have had wifi connectivity, then the screen dying wouldn’t have been a critical issue today. Ah well…

So, now the Roborock S5 Max has entered the house. There is an instant and major difference here, and it is noise. The Roborock is in a completely different league in terms on noise during vacuuming, much more quiet. Even when using the most powerful mode.

The second change, and the reason why I got a Roborock instead of a new Neato Botvac, is the mopping function. It might not be perfect, but having the option is pretty sweet.

In terms of pickup ability the side brush does help, though it doesn’t help as much as I had hoped, but it is a lot better than no side brush at all. It might also be that the round shape of the Roborock put’s it at a disadvantage in corners, compared to the D-shape of the Neato.

The smart-aspect of the robot vacuum has also become way more useful, than whatever was available back in 2014. Now it creates a map of your house, you can add no-go zones, no-mop zones, label rooms, it goes on and on. In fact, I was able to add no-go zones while it was running and mapping for the first time. After setting up your rooms, you can then use the app to have it clean the kitchen. Awesome! And with the mapping features, it’s ability to find out where it is absolutely blew me away.

We have a 3 story house, and I was unsure how well multiple floor maps were supported. Most comments on the web draw a picture of a limited or half finished solution. But I gotta say, it’s been pretty flawless and easy to set up. So whatever firmware improvements they’ve made, it’s working! Let me know in the comments if you want me to go more in depth on that in a separate post

Surprised that there would be downsides? Well, I was. It wasn’t until a few days in that I noticed that the Roborock S5 Max wasn’t able to all the way under the bed. It was actually able to get under, but not past the beam in the middle. The Neato XV Signature Pro was apparently just a tad lower.

Secondly, it’s not as capable of climbing doorsteps as the Neato was. This is not a deal breaker for me, but on one of the doorsteps I was surprised at it’s performance. This is likely because the Roborock serves as both a vacuum and a mop though, and if I had to choose, I’d stick with the option to have a mop.

Speaking of the mop, when the Roborock is able to automatically detect carpets, and turn up the vacuum power, it should be able to automatically avoid mopping them. Ecovacs has this working on the T8 series. You can still add no-mop zones, though. I doubt that this will be added as a firmware update, but I expect newer models to get this feature.

I do believe that we are on the edge of something bigger here though. A self-cleaning base, and more advanced object detection are already out there, and I really hope that this will trickle down to a cheaper price range in the near term. For example, I really wish the Roborock had an option for a self cleaning base.

Currently I’m also awaiting a Roborock S6 MaxV, which uses front facing camera’s and AI to detect objects in it’s path. Because we have kids and cats in our household, this feature might be a life saver. I’ve had a robot vacuum for years, and am used to picking stuff up so the vacuum doesn’t get stuck – but if it reduces the times I come home to a stuck vacuum, it’ll probably be worth it.

Personally, I consider the AI object detection less useful than a self-emptying base though. Mostly because I can’t rely a 100% on the AI system while cleaning the bin has to been done quite frequently. On the other hand, if you want to use the mop, you have to interact with the vacuum anyway…

Why the Roborock S5 Max

Why I chose the Roborock? Ok, let’s keep it short:

I narrowed my option to the Roborock S5 Max, the S6 MaxV, the Ecovacs T8+ and the T8 AIVI. I got both Roborocks so I could test if the AI vision is worth it – but in the end it was a matter of price. When I pulled the trigger, I could get 3 of the S5 Max for the price of a single Evovacs T8+. A serious case of diminishing returns. If that hadn’t been enough, there were also several software considerations that came into play. Like ability to map rooms which is way more limited on the Ecovacs.

If Neato would bring a self-emptying base to market, I would strongly consider that, given my earlier experience with the company’s vacuum robots.

Note: Ecovacs has one great advantage though, it can automatically avoid carpets while mopping. We basically only have hardwood floors though, so not an issue for me.

I’ve been running the S5 Max for a while now, and it’s great! But, if the Neato had still worked, I would simply place it somewhere else in the house and keep it running. For now though, the Roborock is a solid improvement and I can highly recommend it.

For more information, I recommend the Vacuum Wars review. 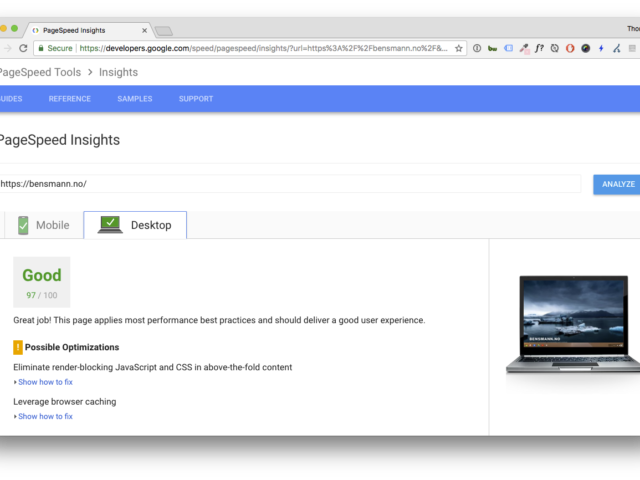 When I chose to venture back to the WordPress default theme, one of my worries was about my Google PageSpeed score. I had to take a serious hit, right? Spoiler, there is a surprise ending! Some years ago I had made it a mission to get the perfect score across…